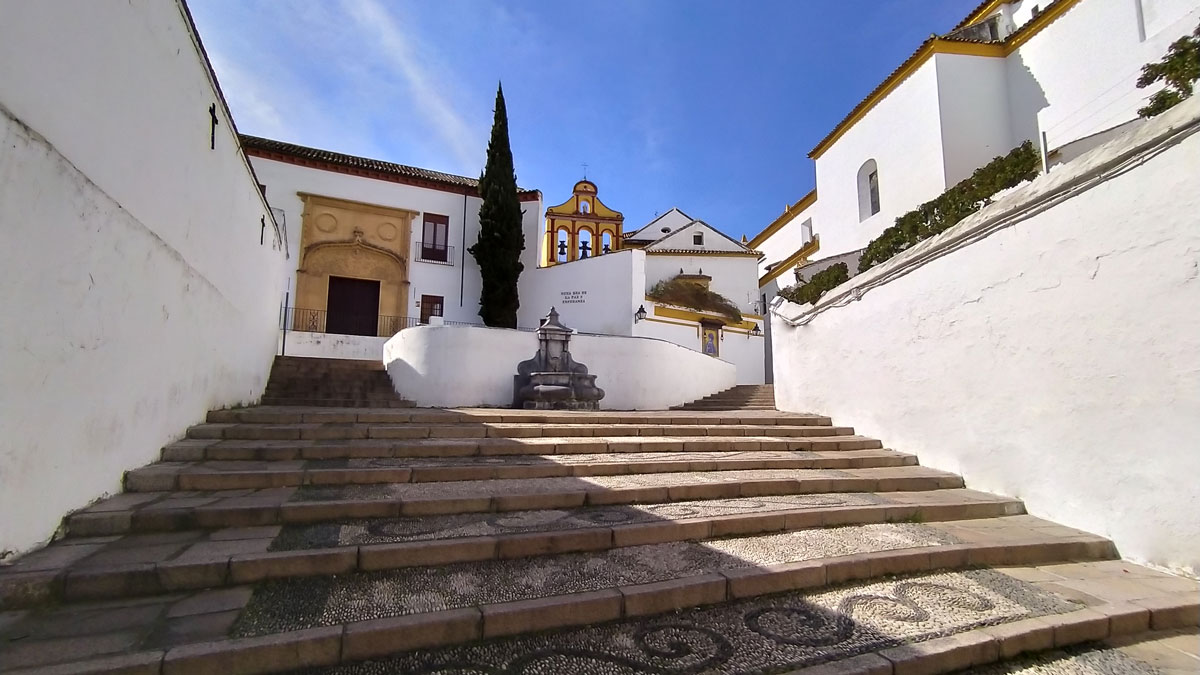 The slope of the Bailío is a street that has a slight slope, which is covered up some comfortable steps with a very characteristic decoration. Both its surroundings and its history make this place a very special place to walk and admire the ancient streets of Cordoba.

Environment of the Bailío Slope

La Cuesta del Bailío crosses in its lower part with Calle Alfaros, an almost pedestrian street that runs through a part of the old town, reaching the Town Hall and the Plaza de la Corredera.

In its upper part it is linked with Carbonell street and Morand, another semi-pedestrian street where the Casa del Bailío is located with its Renaissance facade. It also gives way to the famous Christ of the Lanterns, in the Square of Capuchins.

As you climb the slope, it is your right side there are planted a lot of bougainvillea, which give an intense color to the street, which is bounded by white walls. At the top of the dance slope there is a dark marble fountain and on it a kind of balcony where you can look to see the lower part of the city.

Behind the fountain, the facade of the House of The Bailío, which gives its name to the street, together with the Brotherhood of Peace and Hope, attracts attention. The tower and bell tower of the church and convent of Capuchins also draw attention.

History of this street

La Cuesta del Bailío once was the connection between the Medina in the upper part of the city with the lower part, the Axerquía. This street crossed the ancient wall of Roman origin.

Until 1711 there was an arch through which crossed the street, the Portillo de Corbacho. When it was knocked down, the street could be given the width it now has. It wasn’t until two centuries later that he was given to the slope what he looks like now.

Víctor Escribano Ucelay was the architect who carried out the remodeling, designing the characteristic steps that we see now and installing the black marble fountain in the upper part.

Now you know that the Cuesta del Bailío is not cuesta, rather staircase, but the important thing is that the whole is part of the ancient Cordoba and of there all its charm.

Things to do in Cordoba