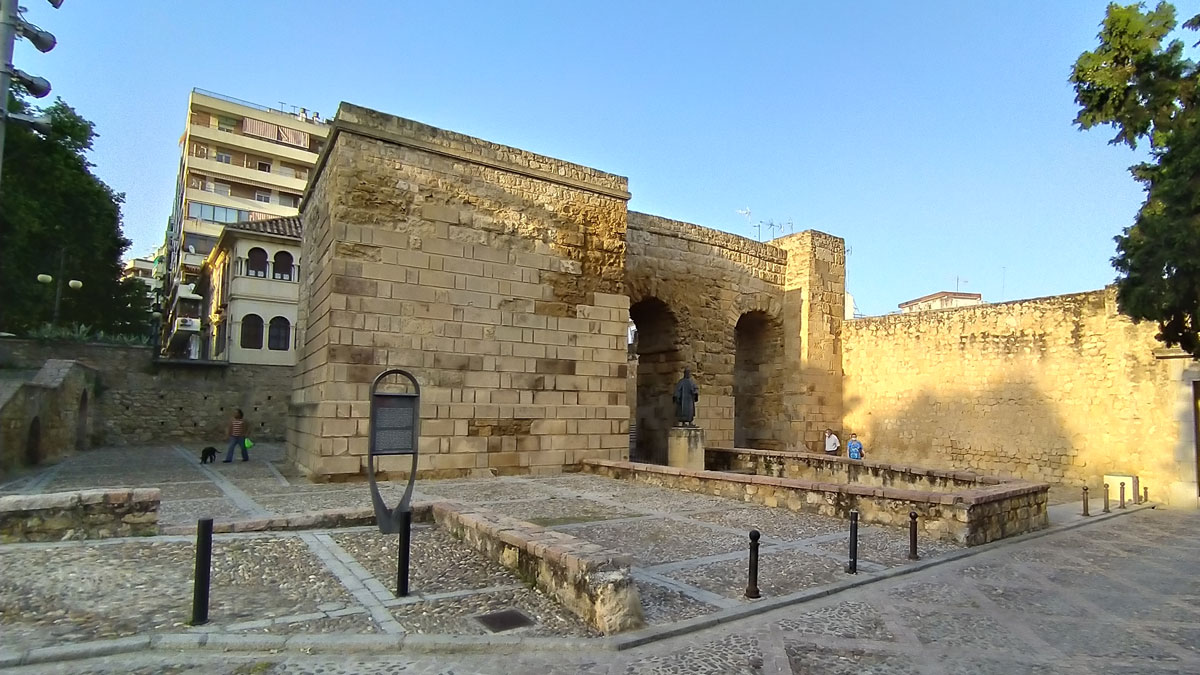 The Sevilla Gate is the access to the popular San Basilio district, the famous Alcázar viejo, famous for its beauty in its spectacular gardens and typical Patios.

This place of Cordoba is very visited by residents or tourists, a unique environment, giving entry to the typical neighborhood of the town, being the person who comes to visit it in a place very comfortable for its color and impact when observing it.

It stands out notably when observing its two twin arches attached perpendicular to the wall, running next to the door on one side and on the other a square tower.

Its structure is erected with sandstone ashlars, its only simple vain bordered by granite, on which the emblem of Cordoba is displayed.

History of this door

Its building comes from Islamic times, having a purely military function. During the period of Muslim predominance it was known as Drogueros Gate, later taking the name with which it is known today after the reconquest, being the immediate exit to the road that coupled the two cities.

Initially the Seville Gate gave its name to another “portezuela”, Royal Stables, that door disappeared in the first years of the fifteenth century, the moment when the neighborhood of Alcázar viejo was built.

The primitive door was demolished in 1865, due to protests by the Cordoba who saw in it a nuisance for the transit of loaded carriages.

Today we enjoy a Gate of Seville rebuilt last century. During the 1950s Mayor Antonio Cruz Conde ordered the reconstruction of part of the wall and the door, the architect José Rebollo.

What to see next to the Seville Gate

There you will find within the arches the monument to Ibn Hazm, politician, theologian, philosopher and historian, Cordoba jurist. It is the work of the master sculptor Mateo Ruiz Olmos in 1963.

This bronze sculpture is depicted from Hazm standing, carrying a roll, where he carries his icon and famous work “The Necklace of the Dove”.

The walls of Cordoba run from the gate of Seville to the river, being a Christian work of the fourteenth century, built as a defense of the Alcazar of Christian Kings.

Next to the door a structure with arches, these have made many think that it was an aqueduct in caliphate times, rather it seems that these arcades were part of an Albarrana tower.

Inside the door, on the other side you will find the neighborhood of San Basilio, with a large square surrounded by houses built in the traditional style.