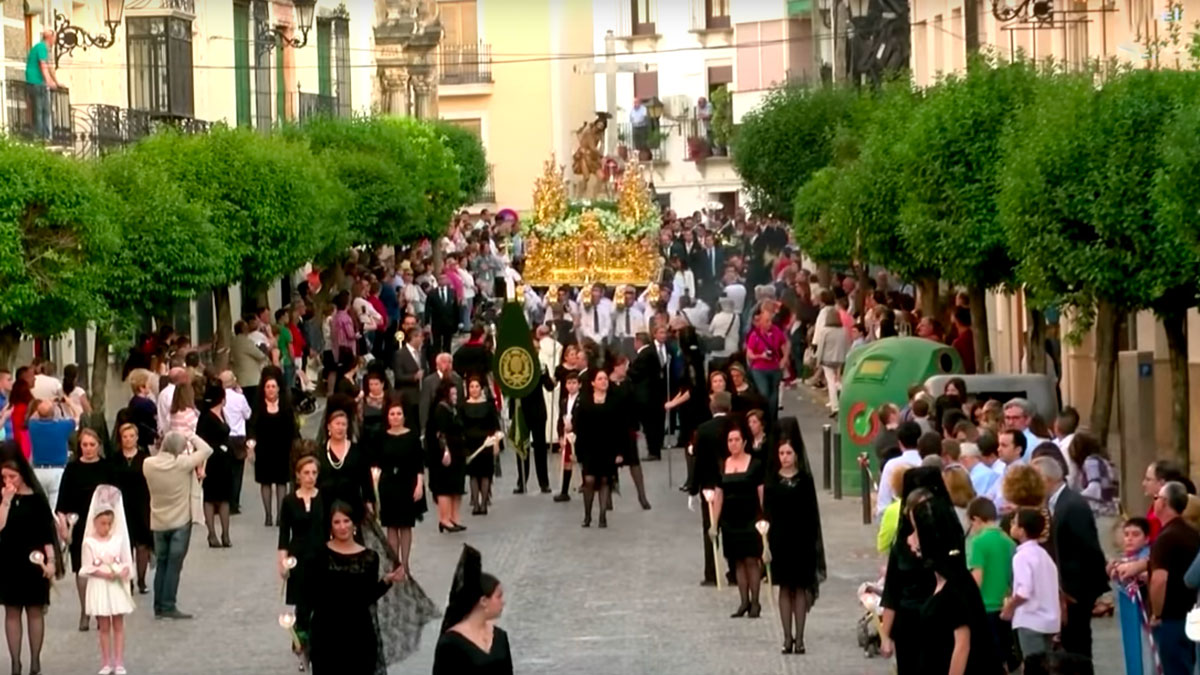 The Holy Week of Priego is known for the great fervor and passion it generates in all the prienguenses. For the neighbors of Priego, the holy week is one of the great dates of the year. This festival is declared as FiestaNa National Tourist Interest of Andalusia and together with the large number of faithful, stands out for its images of Baroque and Renaissance style.

The most marked day is Good Friday, when the Nazarene is taken to the Hermitage of Calvary so that the attendees may receive their blessing. This is possibly one of the most anticipated times of the year for the faithful.

The processions in Priego begin on Palm Sunday, with the procession of the “Pollinica”. A well-known processional step that is focused on children. In this way they are brought closer to the brotherhood world, as they will continue the tradition of Holy Week. Depart from the church of San Pedro and walk several of the most central streets of the village until you gather in your temple.

Another of the Processions of Palm Sunday is that of Ntro. Father Jesus in Prayer in the Orchard and Mary Most Holy of Peace. This is a Brotherhood with few years of tradition, but many faithful follow.

Holy Monday is the day chosen for Mary Most Holy of Sorrows and the Christ of Good Death to descend in procession from Calvary to the Church of the Assumption. This is one of the most important processions of Priego, both for the number of faithful, its great tradition in the village and the “scene” of the whole step.

On Holy Tuesday the Brotherhood of Charity stands out, and its main steps are the Virgin of the Homeless and the Christ of The Expiration. This last image dates back to the 18th century.

On this day the representation of the Assumption is celebrated. It is a kind of theatrical scene that is performed in the Town Hall Square. It gives life to the evangelical landscape of the Lavatory, the Supper, the Prayer in the Orchard, the Sale and the Assumption of Jesus.

There are two confraternities that come out on Holy Thursday. One of them is the Pontifical and Royal Arch-physicist of The Holy Veracruz, Ntro. Father Jesus in the Column and Mary Most Holy of Hope.

The first of the images in procession is to the Santa Veracruz, which is carried to the shoulders by coastal women. Next is the Jesus of the Column, finished with the Virgin of Hope.

The Brotherhood of Mary Most Holy of Sorrows and the Christ of The Good Death make their procession in the opposite direction to the one they made on Holy Monday. This procession begins at one o’clock in the morning.

Good Friday is a very special day for the faithful of Priego de Córdoba. At about eleven o’clock in the morning he goes out to process the Brotherhood of Our Father Jesus Nazarene, bound for the Mount Calvary. It is followed by the image of Our Lady of Sorrows.

The image of Jesus Nazarene is dated to the sixteenth century and is highly revered in this town. She is carried on his shoulders by a multitude of faithful who crowd by the pass, already on the mount of Calvary, the more faithful eagerly await their blessing.

In the afternoon he makes his departure in procession the Royal Archcofradía of the Precious Blood of Ntro. Lord Jesus Christ and Ntra. Lady of Anguish and Ntro. Father Jesus in His Descent. It consists of several steps that make its way out from the church of the Angustias and it is composed of the image of the Virgin of The Angustias together with Jesus in her descent.

In the Church of San Pedro, the Royal Brotherhood of the Holy Burial of Christ and Mary Most Holy of the Crowned Solitude makes its processional exit. The images that take to the street are those of the Virgin of Solitude, a baroque image of the seventeenth century and the Lying Christ, dating from the sixteenth century.
Resurrection Sunday

Finally, Resurrection Sunday in the morning is the date on which the Royal and Venerable Brotherhood of Ntro. Father The Risen Jesus and Mary Most Holy of Heads bring out in procession the Virgin of the Head and the Risen One. It is customary that in this last procession of the Holy Week of Priego they come from other sororities with their corresponding pendons, in addition to other authorities.