Madinat al-Zahra is the city that the Caliph Abderramán III ordered to be built to show the world the splendor of his Caliphate. It is strategically located at the foot of Sierra Morena and far from the city of Cordoba and its name means “City of Light”. History wanted the city not to reach the century of life and was devastated by the Almohads, years after being abandoned.

Today, Madinat al Zahra is a city in reconstruction, which shows us all the greatness it had to have in its day. The monument has been declared as Asset of Cultural Interest and has recently been rated World Heritage by Unesco. If you want to know more about this monument, history, interesting details, schedules or how to get there, I encourage you to continue reading …

To know the history of Madinat al-Zahra, one must go back to the 8th century, when the Umayyad dynasty was expelled from the Caliphate of Damascus. Abderramán I, member of the Omeya dynasty flees to al-Ándalus, constituting the Emirate of Cordoba. Years later, his successor Abderramán III proclaimed Caliph of Cordoba and decided to build Madinat al Zahra in the year 936, a palatial city to expose the world to the power of his Caliphate.

After the death of Almazor in 1002, who was Prime Minister of the Umayyad Caliphate, a series of internal wars followed one another through succession. These wars end in 1031 when the Umayyad Caliphate ends. Madinat al-Zahra would be abandoned, exposed to constant plundering until several years later it is destroyed by the Almohades.

The passage of time caused the history and origin of the site to be erased. For several centuries it has been believed that the archaeological remains were of Roman origin, in fact, the place has been called until very recently “Old Cordoba”. It was from the late nineteenth and early twentieth centuries when various investigations confirm that what was there was Madinat al Zahra, the city that built the Caliph Abderramán III. 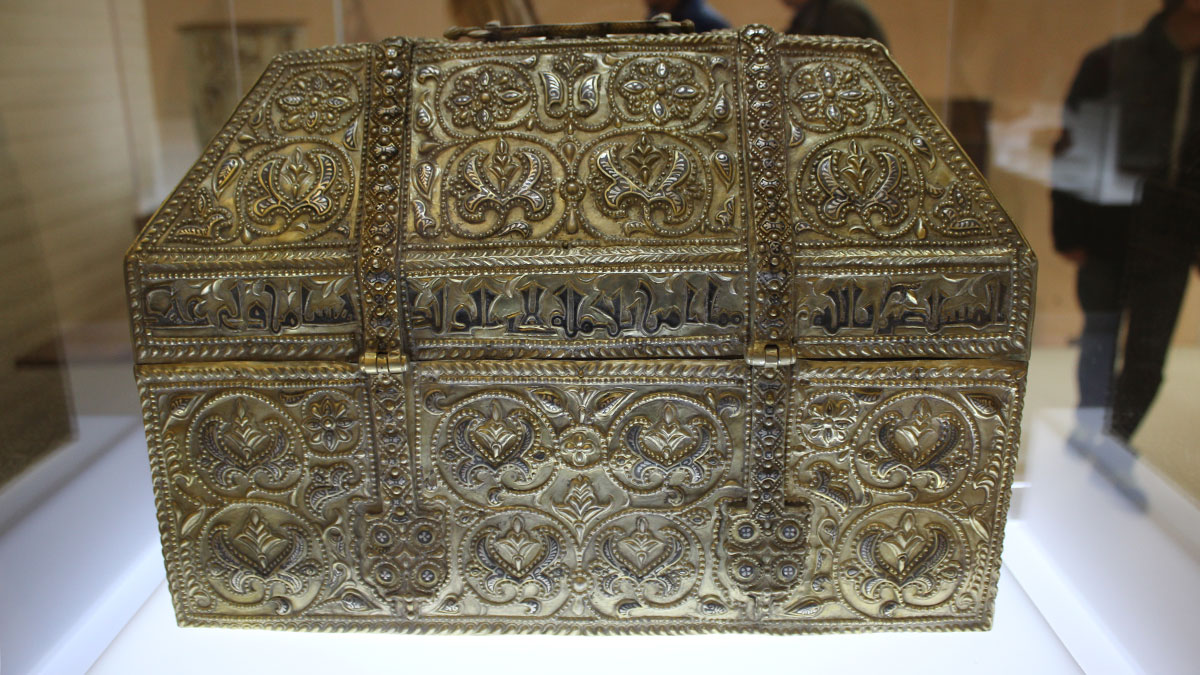 The City of Califal is composed of several very different areas that I summarize below. The architectonic set is exceptional, the fact of having been abandoned after its destruction has been a great luck over time. Having not built on it, as with many other monuments from different eras in Cordoba, the remains are intact and tell us the story of what really was there.

When visiting Madinat al-Zahra you should pay attention to the Grand Porch, the entrance to the important Palace visits, the Aljama Mosque and the Basilical Building or Army House, which is in good condition. Already in the lowest area of ​​the city you have the Rich Salon, the most luxurious room in the city, which together with the Pool and the High Garden make a magnificent set.

In the center of the Medina are the House of Jafar and the one of the Pool. These houses show what life was like in this place. Finally the Real Home, although it was devastated with the destruction of the city, gives an idea of ​​what the Caliph should feel when looking out on his terrace and dominate the whole city from the top. 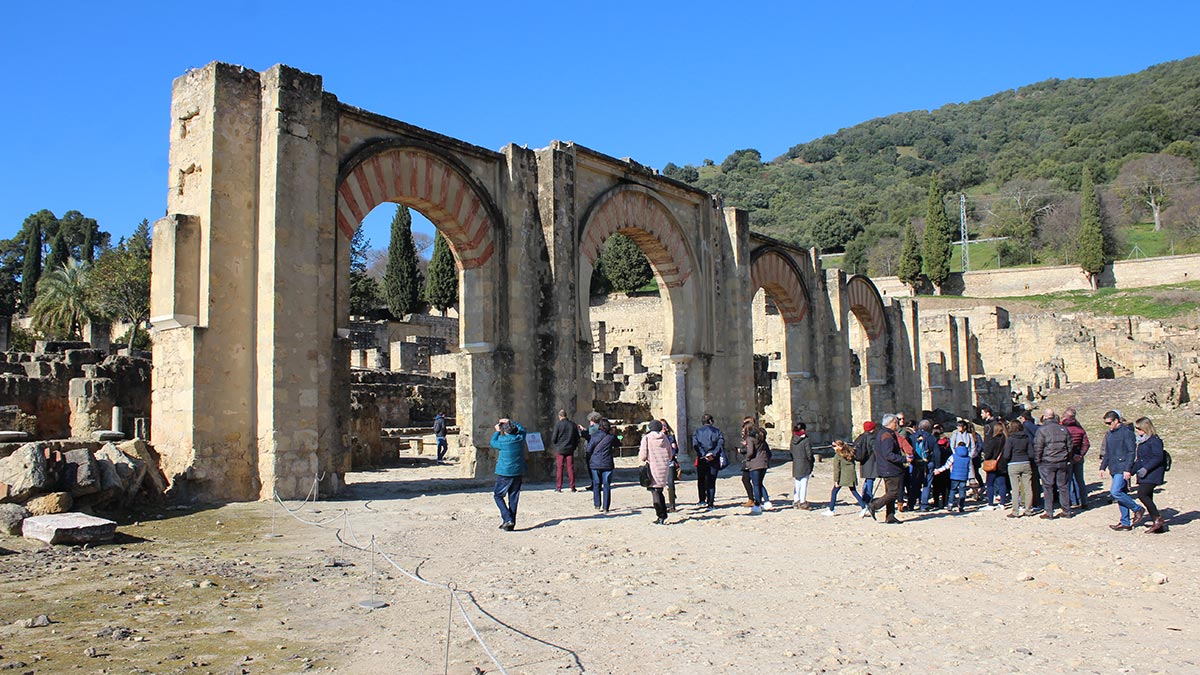 In the most oriental zone of the city, is the Grand Porch. This is the entrance by which all the personalities were received who were going to visit the Caliph. A door of large dimensions, which came to measure 111 meters long and which has a height of 9.46 meters.

There are still 4 of the arches of the Grand Porch. It can be seen perfectly that the central arch, where the main door would be, has a horseshoe arch decorated in the classic shades of limestone and red brick. On the contrary, the other arches of the Portico, although with the same decoration, are round.

The North Door of Madinat al Zahra, as its name indicates, is the one located on the north wall of the City. It is not an access that will be used for the authorities, so it is rather poor in decoration. What we know about this entry is its disposition, which had a double door system to increase security and that was guarded by guards. 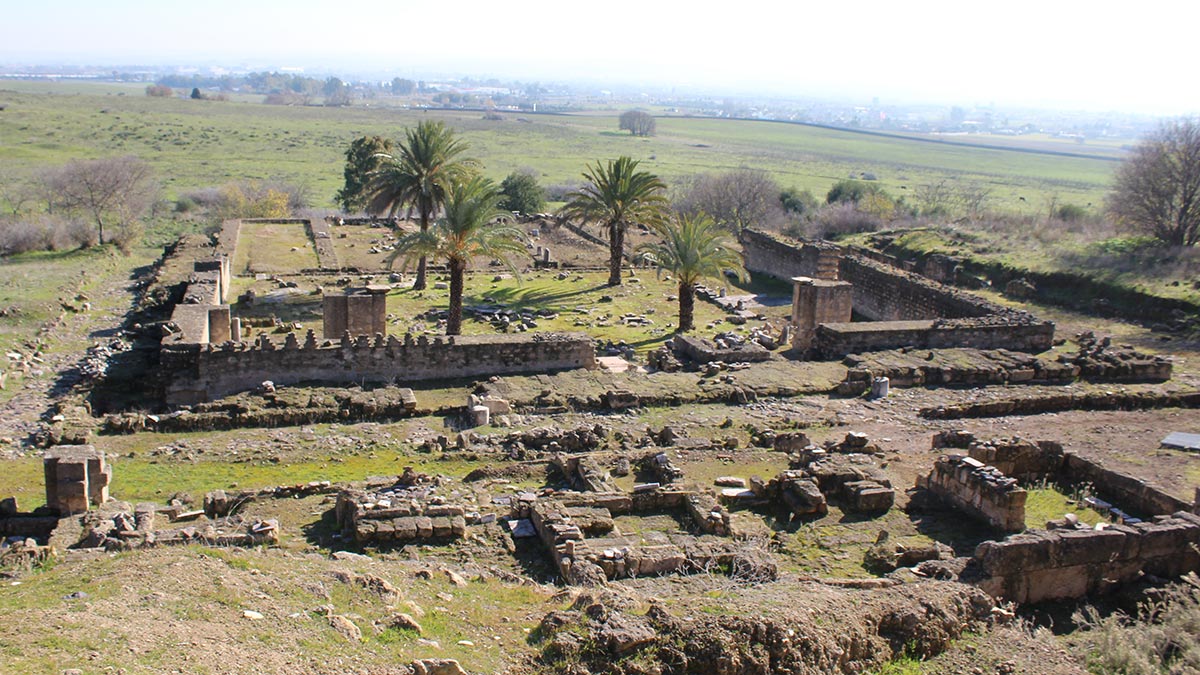 The Aljama Mosque is located in the eastern part of Madinat al-Zahra, outside the walled enclosure. This Mosque is one of the parts of the city that is in a worse state of conservation. What can be appreciated through its plant are the orientation, the dimensions and the different rooms of the Aljama Mosque.

This Oratory is perfectly oriented towards Mecca, unlike the one in Cordoba, which has its orientation towards the southeast. The normal thing in all the Muslim temples is that they have this orientation, but it draws attention that it was not built following the same guidelines as the Mosque of Cordoba .

The measurements of the Aljama Mosque of Madinat al Zahra are 25 meters long and 18 meters wide. The enclosure was accessed by the Yards of ablutions, where the Alminar was also located. From there to the prayer area, which was formed by communes and horseshoe arches in longitudinal buildings. The arrangement was somewhat similar to the Mosque of Cordoba, although in smaller dimensions.

A covered passage from the Rich Salon to the Mosque has been documented, so that the Caliph could access prayer more easily. From this access, remains of a bridge with three arches are still preserved. 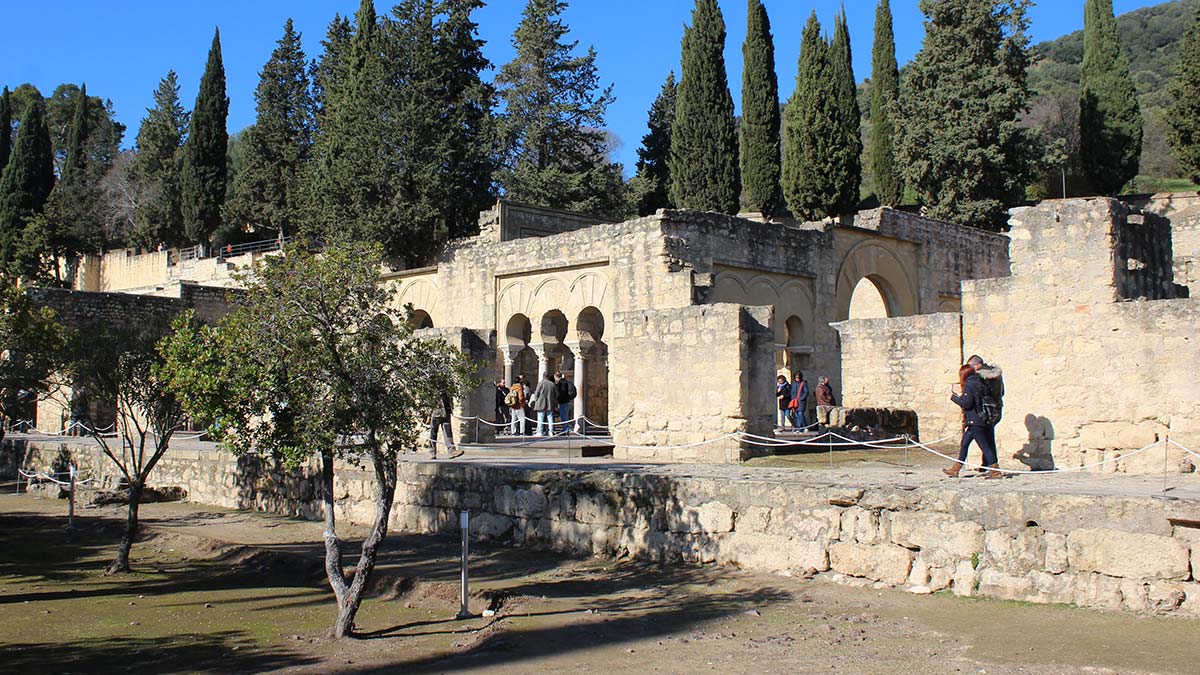 House of the Army

One of the most well-preserved buildings in the whole complex is the Basilical Hall or Army House (Dar al-Yund). It is one of the images that more times you have seen of Madinat al-Zahra, because it has a good state of conservation and because it has received important restoration works.

It is known that this space would be reserved for the visits that arrived in the City, waiting for the Caliph to receive them in the Rich Salon. It is a building facing south, composed of thick walls and columns and horseshoe arches in its vast majority. 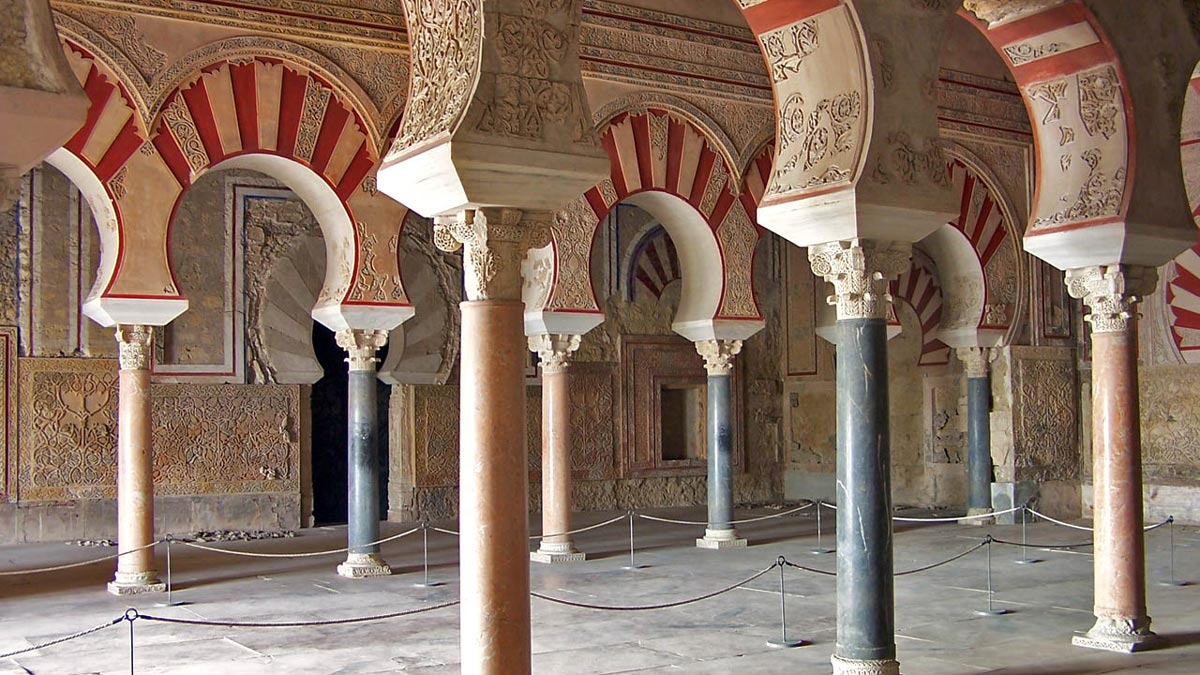 The RichSalon is the most important without a doubt of the entire Caliph City. It is also called Hall of Abd al-Rahman III or Oriental Hall. It is known that in this space important events of the Palace were celebrated. It was instead of reception of Kings and great authorities who came to visit the Caliph.

What most striking are its dimensions, decoration and the environment where it is located within the city itself. It is a large diaphanous space of 38 by 28 meters, with multiple columns and horseshoe arches to the style of the Mosque of Cordoba. In front of the Rich Salon there is a large pool, which full of water would reflect all the sunlight on the room. Surrounding the pool and the Hall is the High Garden, with numerous vegetation and making an exceptional set.

The Rich Salon decoration is composed of high quality marble columns in pink and blue tones. On the columns, horseshoe arches in two tones, the color of the limestone and red. The capitals of the columns are carved with the hornet’s style. The floor of the room is of polished marble and the walls have decorations with plant motifs made with carved marble.

The High Gaden is located in front of the Rich Salon, surrounding the large pool that was used to water the garden itself. For the construction of both the garden and the large pool, three walls with buttresses were built. The Garden is divided into four zones and has ditches and channels. The water that the city had, came from the Mountains of Cordoba. 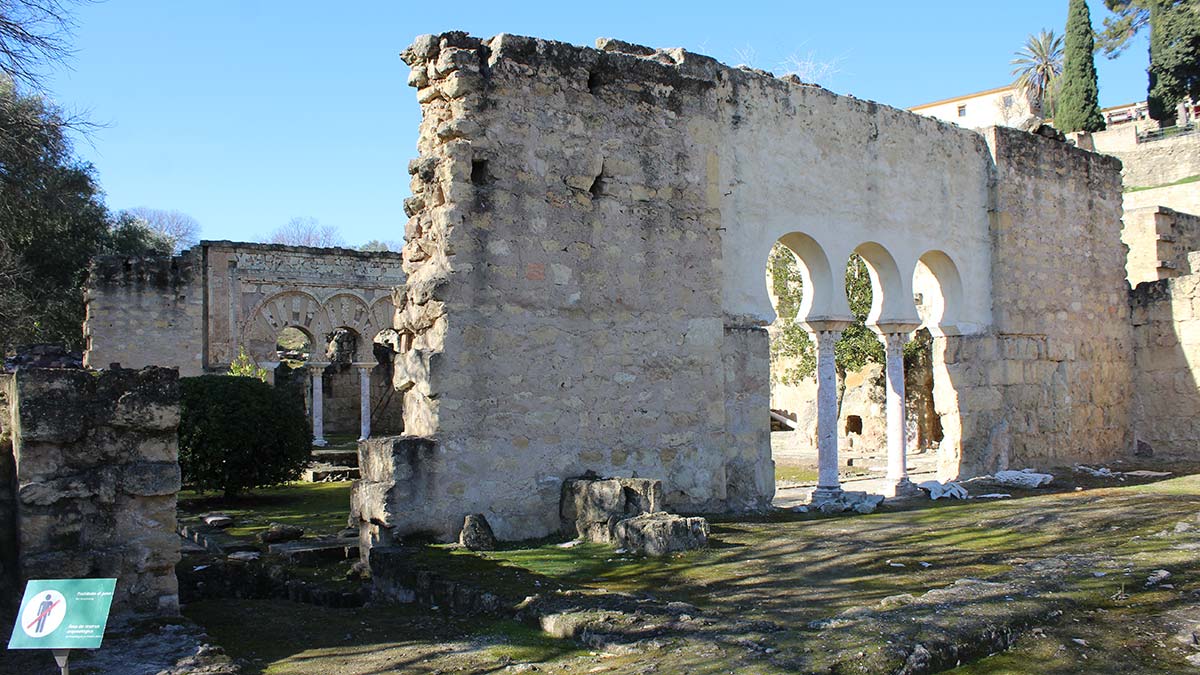 House of the Pool

The house of the pool is a building inside Madinat al-Zahra of which it is conserved its plant and its porticoed entrance with arches. It is a house that has a central courtyard at the entrance, gardens with pool and separate rooms. Another feature of this house is that it has a bathroom and its own latrine.

Of this house it is known by its structure that it should be the one that inhabited the Crown Prince Alhaken (Son of Abderramán III). Due to its poor state of preservation you know few details of this House of the Pool, although it is intuited that it was one of the earliest buildings in the city. 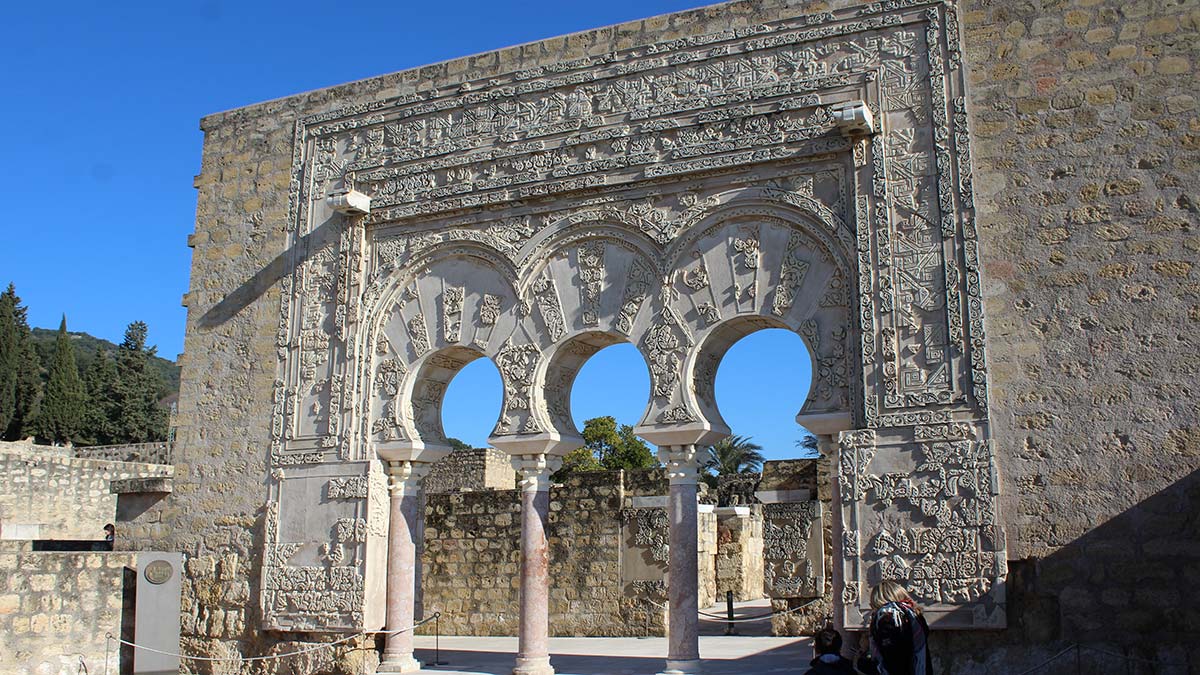 The one who was prime minister Ya’far ibd al-Rahman, gives his name to this house located to the south of the service dwellings. It is a house with a portico of columns and arches with a rich decoration. It has several yards, rooms, bathroom and independent latrine.

The house was inhabited by Ya’far idb al-Rahmán, so it was arranged in its distribution of a public and private area, in addition to the service area. Due to the state of conservation, each of its zones can be perfectly observed.

The Royal House or Dar al-Mulk (House of Power) is the private home of the Caliph. It is located in the highest part of the city, with the particularity that it is an open house with views to the south. From the Royal House the Caliph could contemplate the valley of the Guadalquivir, the river and the countryside.

This Royal House was devastated, so its state of preservation is terrible. Through the remains and the field studies, it has been possible to know that it had a terrace accessed by two stairs. Its decoration is based on carved stone, marble columns and horseshoe arches. 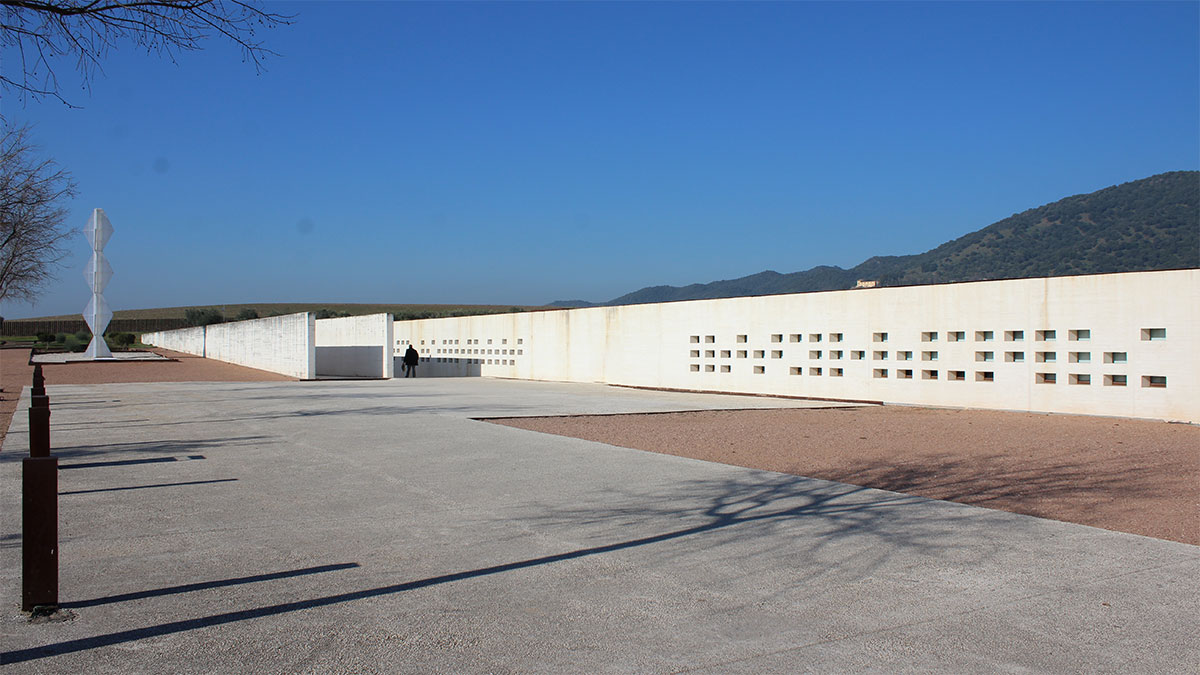 The visit to Madinat al Zahra begins at the Visitor Reception Center. In this Center is the Museum of Madinat al Zahra, with a permanent exhibition of pieces recovered from the Palatine City. This center is just 800 meters from the archaeological site and has been designed on several floors under the ground, in such a way that it does not alter the landscape value of the Muslim city.

Inside it is the reception of visitors, an auditorium with projections to know what the city was like before its destruction, the archaeological remains store, library, cafeteria and the Museum of Madinat al-Zahra. In the Museum you can see pieces such as the famous Cervatillo, a replica of the Hisam II arcade, decorated capitals, pieces of carved arches, coins, pots, etc …

To visit Madinat al Zahra for free you have several options. To get to the Visitor Reception center you can go by car (there is a large free car park), taxi or on a bus that leaves every day from Cordoba to the site.

Once in the reception center and after seeing the Museum (this is optional), you can expect a shuttle bus that goes up to the monument, this shuttle bus takes just two minutes to get to Madinat al-Zahra. Until recently, the monument was accessed by road, but due to the large influx of visitors, access for visitors has been changed.

To know better Madinat al-Zahra you can hire a guide, but with the information that they give in the Visitors Center (and in this website) it is enough to understand the history of the site.

The opening hours of Madinat al-Zahra vary depending on the time of year. As it is an open-air site, the hours of daylight are decisive for the visiting schedule.

Every Monday is closed to the public.

The holidays in which the site remains closed for visitors are:

So far a short summary of Madinat al-Zahra, a site that is worth visiting for its great importance. If you liked it, you can evaluate with your vote or share it in your social networks.